If you want a list of the current homes for sale zoned to Sugar Land’s top-rated schools,
then sign up below for an email list with photos, maps, and more!

Also know that school ratings can and will fluctuate from year to year…generally moving up or down one point each year. For example, Austin HS was rated a 8 in 2017 but moved up to a 9 (on greatschools.org) in 2018. Some schools stay the same rating from year to year, but some may move up or down.

Another thing to know…a neighborhood may be zoned to multiple elementary, middle, and high schools. So you may want to live in large neighborhood like First Colony, but just know that your home may be zoned to one of seven elementary schools, two middle schools, and two high schools…depending on which part of First Colony you live. Or if you live in Greatwood (awesome neighborhood!), you will have Sugar Land address but will be zoned to Lamar Consolidated ISD (which is rated higher than Fort Bend ISD overall and which has excellent schools).

Also know that school zones can and will change over time….especially in new home developments. And if a new neighborhood (like Riverstone or Sienna Plantation) builds out quicker than schools are added, then you could be rezoned multiple times…and maybe to lower-performing schools than originally expected. So be very careful about choosing homes based on their current school zones! (This is why you need a local area real estate expert, like Sheila Cox,to find the right home.)

>> There Goes the Neighborhood

Sugar Land schools are known to be excellent. Over half of the 33 elementary schools have a score of 9-10 with Greatschools.org and, likewise, six of the fourteen middle schools score a 9-10 as well. There are eleven high schools serving the area and two score 9s  and two score 8s. Sugar Land is part of Fort Bend ISD which is an award-winning school district but does not rate as highly as the nearby Katy and Lamar Consolidated ISDs. This is because Fort Bend ISD is larger than those ISDs and includes many non-Sugar Land schools (located in nearby Houston).

Sugar Land schools are (mostly) in the Fort Bend Independent School District (get more info). This map shows the schools by color codes according to Greatschools.org. By this you can see where the highest scoring schools are located.

“The GreatSchools Rating is on a 1-10 scale, where 10 is the highest and 1 is the lowest. Ratings are broken down into three categories: ratings 1-3 signal that the school is “below average,” 4-7 indicate “average,” and 8-10 are “above average.” Ratings for these categories are shown in red, yellow and green (respectively) to help you see the distinctions.” 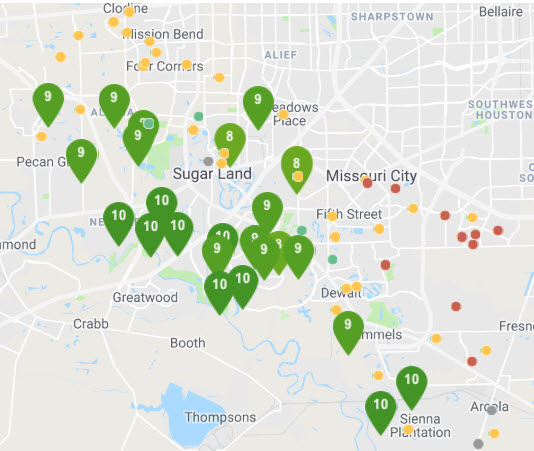 You can view various school zone maps on the FBISD website: